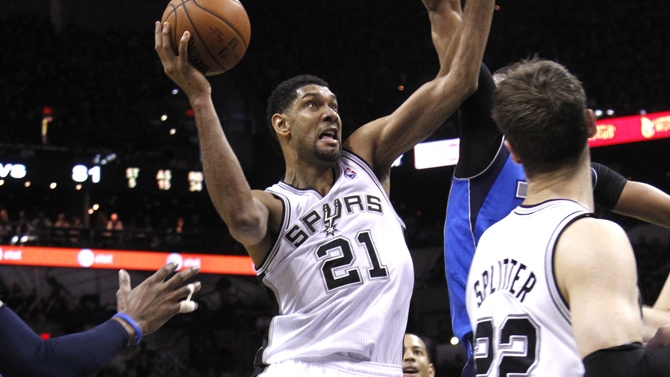 What an exhausting weekend.

I didn’t leave my house once. I haven’t shaved, my eyes are sore, and I have a headache from having three monitors beaming into my eyes for the past three days. That all sounds like a pretty slothful lifestyle, but as far as TV watching goes, this is as intense as it gets.

It’s NBA Playoffs time. “40 games in 40 nights!” as the saying goes. Where even Game of Thrones takes a back seat, because the Bulls and Wizards were going down to the wire and the Rockets and Trailblazers were on deck. This year is as wide open as any as I can remember. Hell, lower seeded teams upset home court advantage in 5 of the 8 series this weekend.

Exciting match-ups make for exciting games, and exciting games make for great drama. Great drama, of course… leads to high stress and high blood pressure and many tweets/status updates for someone like me.

This is an interesting time of year because each series presents you with a simple choice – who do you root for?  Sometimes it’s easy, you just root for your favorite team, but other times, it’s more complex. I like the Warriors more than the Clippers, but I have the Clippers winning in my bracket. It presents a bit of an internal conflict when I’m watching the games (I have the Clips in 6, but I’ve ended up rooting for the Warriors to win anyway).

I like the Thunder more than the Grizzlies, but I want the Spurs to take the whole thing, so a pair of Grizzlies upsets into the Western Conference Finals would be amazing, brackets be damned. It’s a battle of heart and mind. Also, admittedly, I’m an idealist when it comes to the NBA–I believe that organizations that do things the “right” way, that are well coached, have good personalities, deserve to win over other teams. The “right” way also happens to be very subjective in my eyes.

Like I said. Complicated and exhausting. It’s a battle of heart and mind that gets played out as the game goes on and it becomes clear who I want to win the game, despite everything else at play.

So, a quick series-by-series run down of who I think, and who I want to win in the first round. My basketball analysis is subjective and tertiary, but it’s still probably better than the analysis of whoever you’ve been talking to if you don’t have basketball friends.

#1 Indiana Pacers vs. #8 Atlanta Hawks
Bracket: Pacers in 5, Rooting for: Pacers in 7

So… Indiana kind of shit the bed this weekend. I thought with the playoffs at hand, they’d return to their elite form, but that was clearly not the case. They got stomped and looked lethargic. I was rooting for a Spurs-Pacers final last year, and quite honestly, it’s what I want this year, even though it looks unlikely. I think Paul George should emerge as one of the best two way players in the NBA (I’ve always like him more than Melo as a franchise centerpiece), and I respect the organization.  Bird and Vogel run a clean shop, they deserve a deep run, even if it seems like now that their players don’t.

#4 Chicago Bulls vs. #5 Washington Wizards
Bracket: Bulls in 6, Rooting for: Bulls in 6

I’m hoping that this series is where John Wall breaks into the next level and becomes more of a household name. He had that nice dunk all-star weekend, but the Wizards aren’t on national TV enough for him to have an impact on the average fan’s conscience. That being said, I want the Bulls to win. Thibodeau is crazy, and the way the team gets so much out of what they have, despite being counted down and out so many times over the last couple years is a show that I never want to stop watching.

Fuck Miami, yadda yadda.  They’ll likely sweep this series with the Al Jefferson injury, but that doesn’t mean I’m rooting for them.

So… 1. “Fuck Brooklyn” – Masai Ujiri 2014.  2. Actually though, fuck Brooklyn. I think people have been underrating the Raptors. I think they suffer from lack of exposure, and even I’m surprised sometimes when I realize they snatched the 3rd seed in the East. I also can’t stand Brooklyn. Everything about them. I’ve disliked Deron Williams for a long time now, and Paul Pierce is as great a playoff villain as I’ve ever encountered. It’d be pretty sweet to see them go down in the first round.

#1 San Antonio Spurs vs. #8 Dallas Mavericks
Bracket: Spurs in 5, Rooting for: Spurs in 4

The Spurs are my pick to win it all. I’m rooting for them all the way through the Finals. After last year, everything Popovich and Duncan have done, the whole deal. I think realistically, Nowitzki and Carlisle won’t go down without a fight, which means they might salvage one game instead of getting swept.

#4 Houston Rockets vs. #5 Portland Trailblazers
Bracket: Rockets in 7, Rooting for: Somebody in 7?

This one’s complicated. Jeremy Lin is on the Rockets. Watching the team fail in the clutch so many times, and watching James Harden and Patrick Beverley this season has worn on me to the point where I wouldn’t mind seeing them exit early. I go back and forth. I think I’ve descended into Lin-only status, which is admittedly despicable. When he’s on the floor, I root for them, when he’s not, I’m ambivalent/want them to lose so that they learn a lesson. It’s how I felt about the Knicks in the playoffs the last couple seasons. I was rooting for the Rockets last night, we’ll see whether that holds.

#2 Oklahoma City Thunder vs. #7 Memphis Grizzlies
Bracket: Thunder in 6, Rooting for: Grizzlies in 7

The further the Grizzlies can push the Thunder to the brink, the better for the Spurs. Realistically, the Thunder are going to handle this series just fine, but if the Grizzlies hone in on what worked for them in key stretches of Game 1 and stretch this series out, I’d be pretty happy. This is classic “I want a better match-up for the team I want the win the whole thing” schadenfreude.

This series, on the other hand, is a classic heart vs. mind tossup. There is a lot for people to dislike about the Clippers. The first round choke against Memphis last season, the flopping, for some Blake Griffin is a sore spot, Matt Barnes picks fights with anyone and everyone. In the other corner, you have the exciting Golden State Warriors, with Steph Curry and Klay Thompson splashing jumpers everywhere, and you have Andre Igoudala, who makes you swoon if you truly understand defense is an important part of the NBA. Then of course there’s David Lee, who, irrationally, was my favorite player in the NBA for some time. I think the Clippers stand a better shot at giving the Thunder a harder time in the second round, but despite myself, and my bracket, I want the Warriors to win here.