Originally posted at The Nerds of Color

Over the summer, 5-time NBA champion Tim Duncan made waves across the internet when it was revealed that he was going to be immortalized on the cover of a Marvel comic book. Not only were comics fans surprised to have such a legendary sports figure in their midst, NBA fans were surprised that Duncan had a personality!

It all started when, during the Spurs’ most recent championship playoff run in May, a reporter tweeted out this photo of Duncan’s knee braces:

Apparently, Marvel was so flattered that Duncan was a fan of the Punisher (and it looks like Deadpool and Doctor Doom, as well) that they tapped artist Mike Choi to incorporate Duncan as an actual character in the 616 universe.

Basically he and the guys at his BlackJack Speed Shop, along with the guys at the comic store Heroes and Fantasies, got together to put forth the idea of custom making a car that the Punisher might drive, kind of like the Batmobile is for Batman, but more gritty and realistic. The Punisher, whose real name is Frank Castle, is a grizzled, old-school vigilante dispensing justice, and while sometimes he has to remain incognito while staking out bad guys, when it comes to the actual “punishment” so to speak, he likes to make a big show to instill fear in his targets. Hence the big skull on his chest, and now his car.

Fittingly, Choi is a San Antonio native and long-time Spurs fan, so it was a no-brainer to have him officially bring Duncan to the Marvel Universe. And while NBA fans outside of Texas might have been surprised that Tim Duncan — who is usually stoic and emotionless on the court — was a diehard fanboy, folks in San Antonio have known about his fandom for years.

Last week, he and Michael Choi even appeared at Heroes and Fantasies, a local comic shop in San Antonio for a special signing of the Punisher issue that featured the league MVP on the cover.

Here’s what Choi said about Duncan on the Spurs’ official website:

None of this would have happened if Tim wasn’t a huge Marvel fan and The Punisher specifically. I really love that he’s proud of the fact that he’s a big comic book fan, and I always got a kick out of reading about him dressing up as The Punisher for Halloween, and incorporating the Punisher’s logo on his knee brace. Everyone who knows about Tim Duncan beyond what he does on the court knows that about him, and as a comic book guy myself, I think that’s awesome.

Tim Duncan cosplaying as The Punisher?! Pictures or it didn’t happen!

Yeah, I take back any bad thing I ever had to say about The Big Fundamental. Seriously, it’s nice to see this whole other side to an NBA superstar that, quite frankly, likes to stay out of the spotlight. To know that he’s actually a big nerd1 is really endearing. That said, it turns out Duncan isn’t the only fanboy in the NBA. Hell, he ain’t even the only fanboy on the Spurs!

Tony Parker, one of the league’s elite point guards and Duncan’s teammate since 2001, is also a comic collector. Again, this may not have been a surprise to folks in San Antonio, but to the nation at large, we didn’t know about Parker’s fandom until he talked about his collection — including Doc Brown’s DeLorean from Back to the Future — on Jimmy Kimmel Live.

The duo in San Antonio may have multiple championships to go along with their geek cred, but that doesn’t mean they’re the biggest nerds in the Association. In fact, that title may go to the literal twin towers of the Brothers Lopez: Brook and Robin.

Each standing over seven feet tall, the twins are just at home at Comic-Con as they are on the hardwood. They may not play on the same team (Brook is the All-Star center for the Brooklyn Nets while his brother Robin plays for the Portland Trailblazers) but they both share a passion for comic books. The other difference? While Duncan and Parker are clearly Marvel Zombies, the Lopez twins are devout DC disciples.

Here’s Robin explaining who his favorite heroes are:

The former Stanford Cardinal took some time to also name his five favorite DC characters. “There’s a lot,” pointed out Lopez. “But naming them would be easy. The Wally West Flash. I love what Mark Waid did for the character – the Speed Force and the Return of Barry Allen storyline are to my mind some of the best Flash stories.”

“I also like Impulse. Another speedster — can you tell I am a Flash fan? (laughs). The Kyle Rayner Green Lantern. The Tim Drake Robin, and Cyclone of the Justice Society of America. These are the characters I grew up reading.”

This isn’t the first time comic fandom has been part of the NBA. The most famous NBA player to come out as a fanboy is still future Hall of Famer Shaquille O’Neal. In addition to his famous “Man of Steel” tattoo, O’Neal was known for emblazoning the S-Shield on literally everything he owns. Hell, he even starred in his own (admittedly terrible) superhero movie for chrissakes.

Shaq’s love of Superman was unparallelled… and then Dwight Howard happened.

Ever since D12 was drafted as the #1 overall pick by the Orlando Magic, the comparisons to his superstar predecessor were inevitable. Like Shaq, Howard was a physical specimen and defensive specialist known for his thunderous dunks and inability to hit a free throw. Howard even mimicked O’Neal’s disenfranchisement with the Orlando Magic’s upper management and similarly bolted central Florida for the bright lights of Los Angeles, where — again, like Shaq — he had a public falling out with Kobe Bryant.

That’s were the similarities between Shaq and Howard end. At least on the court. Despite never really being rivals on the court, the Shaq/Howard beef really picked up steam once O’Neal retired and became an analyst on TNT. Using his new found platform to harp on Howard’s play. Most people think that Shaq views Howard as a usurper to his mantle — the similar career trajectory, the All-Star shenanigans, etc. — but I think what really gets Shaq’s goat was Howard’s embrace of the Superman persona.

While Shaq’s Superman fandom was apparent from the start, Howard wasn’t associated with the iconic superhero until the 2008 All-Star Weekend in New Orleans when he first donned a red cape and S-Shield to win the Slam Dunk contest. 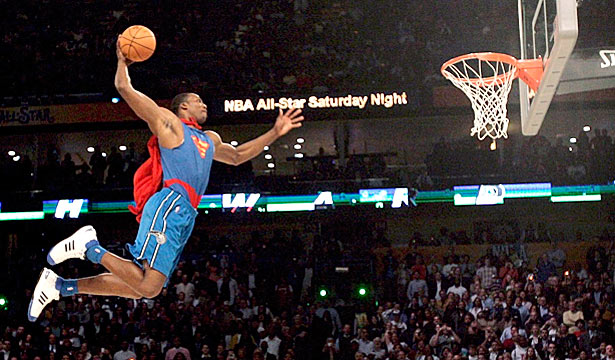 Now, I’m not one to call out “fake geeks” but people seem to forget that Howard’s use of the Superman persona was not really about the iconic DC hero at all. Remember, one of the biggest hip hop singles at the time was Soulja Boy’s “Crank That” which featured the infamous line “watch me crank that Soulja Boy then Superman that hoe” and accompanying dance. Howard even credited the song and dance as the inspiration for his dunk. Moreover, just look up what “Superman that hoe” means, and I’m pretty sure that it had nothing to do with DC Comics.

Whether or not Howard was inspired by the comics or weird sex acts, the “Superman dunk” is now part of NBA lore2. As we enter in a brand new NBA season, I wonder when we’ll see the next convergence between basketball superstars and comic book superheroes.

1 comment on “The NBA: Where Fanboys are (Big) Fundamental”