You may already know about this documentary, which explores the historic Chinese American sport of “9-Man,” volleyball’s more muscular, less glamorous cousin. We’ve posted about it twice here at Dat Winning. You may even have caught a screening on the festival circuit, where it’s been racking up a host of awards. And if you did see it, then right now you’re probably running a mental checklist on the film’s many engaging personalities, trying to remember who Peter was.

Don’t bother — he’s not in it. However, his sister Ursula, 9-Man’s director and producer, had initially envisioned revolving the entire documentary around him. “Peter’s the inspiration for the film,” she told me.

Two decades ago, after he graduated from Stanford (where he twice failed to make the volleyball team as a walk-on), Peter returned to his old stomping grounds of Boston and started playing “9-Man” for a vaunted institution known as the Knights. This gave him the chance to continue indulging his life-long passion for volleyball while also forging strong Chinatown bonds. As he explained, “Coming back to my hometown and being embraced by this ethnic community that I was really mostly unaware of growing up… is a powerful moment in my ethnic story.” Joining the Knights connected him with other Asian Americans in a way that epitomizes the camaraderie sports can foster.

“There’s a source of pride for me, certainly, that I could roll with these guys,” he attested.

Eventually, the West Coast called again, and that’s where he ended up settling down. Now his main focus is raising a family and running an architecture firm in San Francisco. He hasn’t had a lot of extra time and energy for serious athletic pursuits, although many years ago he did spend a few seasons on my rec league basketball squad (and incidentally was the one who came up with our name).

Ultimately, Peter’s life trajectory didn’t line up with Ursula’s plans to capture “9-Man” on film, for she’d hoped to track her brother’s glorious reemergence on the sport’s oversize asphalt courts. As she revealed, “This film would have been done a lot sooner if he had come back to play. That was the goal, that he was actually going to return on an old man team. He easily could have narrated the whole film then. I could have done a sit-down interview with him. It would have been easier to structure the whole thing.”

While her original idea didn’t pan out, she still managed to make a phenomenal documentary. Layered with fascinating details about the sport’s rich historical, cultural, and social significance, 9-Man follows the progress of several North American teams as they prepare for and compete in a massive international tournament held annually over Labor Day weekend. Ursula compiled a mind-boggling trove of footage from points all over the map, and the film weaves them together deftly, consistently delivering both entertainment and educational value. It’s an impressive effort overall, and should make the Liang siblings extremely proud.

Oh, and those embarrassing stories I could tell about Peter? I guess I’ll let him off the hook — the modest person that he is, I think he’ll feel self-conscious enough just to have this post written about him. But for anyone reading this who knows him, don’t hesitate to go ahead and roast him in the comments. 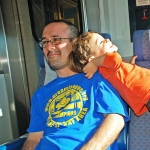 Alec MacDonald is a writer and editor who lives in Oakland, California. Alec is a 2015 Dat Winning fellow.

0 comments on “Brotherly Love: Meet the Man Who Inspired 9-Man”