Two weekends ago, on a rainy Sunday, Wimbledon came to an end. Throughout the final weekend, there was a sense of history being made at the All-England Club. In the men’s singles final between Roger Federer and Novak Djokovic, we saw two elite competitors playing at the highest level. And of course, there was the dominance of Serena Williams in women’s singles. Winning not just Wimbledon, but completing the “Serena Slam” for the second time by winning four consecutive non-calendar major titles. Unstoppable and often unbelievable, Williams is now one US Open title away from completing a single season Grand Slam, an achievement that hasn’t been seen since Steffi Graf in 1988.

History, however, wasn’t limited to the more familiar superstars. Indian tennis star Sania Mirza won her first Wimbledon championship in the doubles competition with partner Martina Hingis. It was Mirza’s fourth Grand Slam doubles title, but only her first in women’s doubles. Since coming back from various injuries, Mirza has found her niche in doubles competition. Earlier this year, she became the first ever Indian player to garner a world no. 1 ranking.

I remember watching Sania Mirza erupt on the tennis courts in 2008. Paes and Mahesh Bhupati had been the stalwarts holding up the flag for Indian tennis, but Mirza seemed to be the hope for a new generation of Indian tennis players and fans. She was a breath of fresh air, and her success along with Paes and Bhupati, surely opened the door for Nagal’s next generation.

Looking ahead to next month, we come to the last leg of the 2015 tennis season with the US Open, yet another showcase where the superstars shine brightest but where lesser known players like Japan’s Kei Nishikori can also become stars. As Serena prepares for more history-making, perhaps Mirza will take another step toward becoming a household name.

Also, this video of Serena and Djoko dancing should be played whenever one is feeling sad: 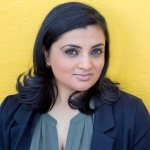 LATA PANDYA | @LataPandya
Lata Pandya is an award-winning TV and radio journalist. She is notorious for watching sports while researching public policy stories. Lata is a 2015 Dat Winning fellow.

0 comments on “Sania Mirza and a Historic Wimbledon for India”