All this poor young woman from Tennessee wanted was a tattoo of a Chinese phrase on her ankle to celebrate her love of languages and travel. So she asked someone on the internet to translate a phrase for her. And, of course as the laws of the internet decree, she got trolled. Somebody tricked her into getting NBA star Jeremy Lin’s name in Chinese permanently etched on her skin. 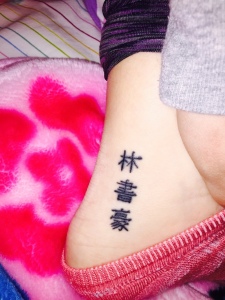 “Always check your sources,” is now something Holland Christensen will never forget. So according to the video above, she reached a crossroads. She could kill herself forever for making such a foolish mistake, or embrace it. She chose the latter.

Holland didn’t even know who Jeremy Lin was, but she did her research, as thoroughly as she probably should have checked the tattoo, and quickly became Lin’s biggest fan.

The video is a full confessional of how it all went down. It’s long so here are some key elements:

So this is a story about a good-spirited young woman who turned a real dick move into something she can celebrate on her own terms. Holland has since been able to attend a Charlotte Hornets game but was unable to meet Lin. But apparently, Jeremy heard of the story and tweeted her this after the game:

He also posted this photo to Reddit of himself copying the tattoo on his own ankle.

0 comments on “Tennessee Girl Mistakenly Gets Tattoo of Jeremy Lin’s Name in Chinese, Decides to Be His Biggest Fan”