In an era of corporatized sports and sponsorships, photographer Steven Counts travels to rural Thailand to capture the quietly powerful origins of Muay Thai boxing

Two years ago Steven Counts packed little more than his camera and two waterproof bags and set off on a solo trip to Thailand to photograph Muay Thai boxing. For five months, he rode through Thailand’s mostly rural Isaan region on a rented motorcycle from village to village to capture the roots of Thailand’s iconic sport.

Counts didn’t speak the language, he had no translator, no fixer, but with gestures, nods and the spare word or two, he found the rural training camps that had historically produced Thailand’s best Muay Thai fighters. This was the story he had never seen in any mainstream media coverage. Counts wanted to photograph Muay Thai in its origins, removed from any kind of advertising or corporate branding.

The result of his efforts is a gorgeous 196-page coffee table photo book printed on uncoated matte art paper simply titled, MUAY THAI.  Funded via Kickstarter, the book is published by Brooklyn-based Victory Editions, producers of the forever dope sports digest, Victory Journal, and the book is due out this August.

Earlier this month, I met with Counts at his apartment in Brooklyn to chat about his experience photographing the book. His five-month tour of the Thai countryside seemed to have as much story hidden behind it as the images themselves.

When he arrived in Isaan, the training camps were, as expected, modest facilities. Students used mostly hand-me-downs to train, oversized shorts, faded boxing gloves, and beaten down old punching bags that seemed to wear the brunt of hundreds of thousands of strikes.

This was a sport of generations upon generations. These were the elements that caught his eye.

“I wanted to focus on the culture itself,” says Counts, “and the people that were born and raised with the sport. I wanted to show the not-so glamorous side. Not just the brutal side of it, but the lifestyle.”

There is a great sense of intimacy in his photos, as if Counts were inhabiting the very same space of his subjects, rather than just observing them through a lens. This is something Counts knows he could not have achieved without the welcoming nature he found across the Muay Thai community to outsiders like himself.

On his first day in town, Counts visited Kiatmoo9, and immediately piqued the curiosity of the fighters. He showed them his camera and they seemed to know what it was he was looking for, but they were closing up shop for the day.

They told him to come back the next day around 4pm. That night, however, Counts ate some food that didn’t agree with him. He spent the next day at the doctor’s office and asleep in the hotel. At 4:30pm he heard a knock on the door.

“I get up to open the door, feeling awful, and it’s a little kid and he’s pointing toward the camp, which is about a half a mile away,” says Counts. “He says something in Thai and motions for me to follow him so I splash some water on my face and struggle over there on the motorcycle.”

“When I get there, they’re all dressed up in their fight shorts, all taped up, with their championship belts and trophies, and immediately I wasn’t sick anymore. Once I saw them, all the pain went away and I connected with them so much from that point on. I had no idea all but one of them were national champs.”

To hear Counts describe the daily significance of the sport in its organic environment sounds a little like the way Americans might talk of the good ol’ days of Texas high school football, or basketball in Indiana, when everybody in town came out for the weekly game. Except in Thailand it’s more amplified, and yet more embedded at the same time.

The sport is steeped in cultural significance and history of greater stakes. Muay Thai was once an applied form of combat used by Thais for centuries to hold off invaders from conquering their land. It’s an ancient Thai tradition and a source of great pride.

“Muay Thai is Thailand and Thailand is Muay Thai, they go hand in hand,” says Counts.

If Counts was surprised to learn that many of the best Muay Thai fighters stayed in the villages they came from, it very quickly made sense to him. There was no real reason to leave. There isn’t a fortune to be made from Muay Thai boxing in Thailand, nor are most fighters looking for one.

“Thai people live very simple, from my experience, I hate to generalize,” says Counts, “but [the fighters] don’t desire a ton of material things. Everyone was happy just living in the village.”

Most top fighters win a comparatively modest purse by U.S. standards, but cost of living is so affordable in their hometowns, there is no need to leave. Champions often trained in the same facilities as they did when they were beginners, side by side with the next generation of fighters. 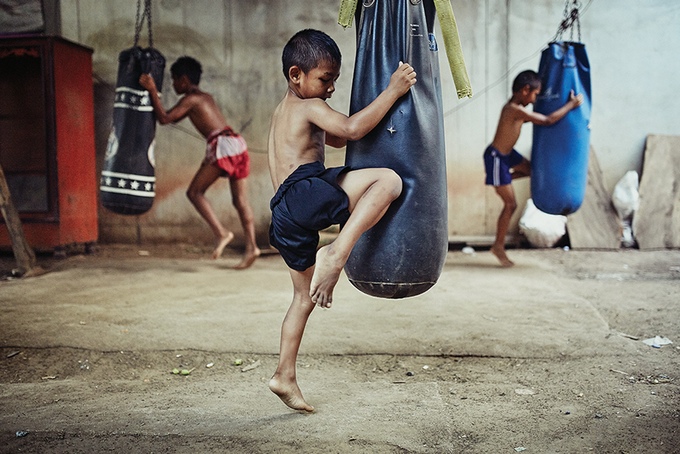 This is like Lebron James going to the local YMCA every day to put up shots with the neighborhood kids. And nobody bats an eye. Celebrity culture is different for Muay Thai boxers, in that there isn’t really one to speak of. Many of the national champions that Counts photographed could walk down the streets unbothered by fans.

“All but Buakaw [Banchamek] can move about without fans approaching them,” says Counts. Buakaw, a former K-1 champion, is a legendary Muay Thai fighter known for his international success.

Professional sports hasn’t quite been monetized in Thailand the way it is in the West, and for Counts it’s a romantic notion. For a photographer that’s made a career working with celebrity athletes, shooting for the likes of Nike, Jordan Brand, Red Bull, and ESPN the Magazine, Counts has an appreciation for this level of casual humility.

Through Counts’ experience, one gets the sense that this is all very sincere. There is little posturing or angling for more. These men didn’t fight for fortune or fame, or even just the love of the game. They fight because for them, that’s just what it means to be Thai.

There’s a hint of wistfulness in Counts’ voice by the end of our interview. “The landscape for Muay Thai is changing as we speak,” he says.

“There are more options, soccer is gaining popularity. More colleges are being built, there are more opportunities for rural Thais to pursue education. And that’s a good thing, but as a tradition, Muay Thai is in decline.”

The landscape on the elite professional level is also changing as more international attention, and more foreign money, is funneled in to the sport in Thailand. Some of the camps that Counts visited now indeed have advertising and corporate sponsorship.

After the book is published, Counts plans to hold gallery showings here in New York City and back in Thailand. He was never sure if his very willing subjects ever really knew what it was he was going to do with all those photos.

So Counts intends to bring a number of copies back to Thailand to give to the fighters, so they have a record of the sport and how it was, no matter how it might change through time.

All photos courtesy of Steven Counts. You can find more of his work on Instagram here: @stevencounts.

0 comments on “‘Muay Thai’: Photographing the Roots and Culture of Thailand’s Greatest Tradition”