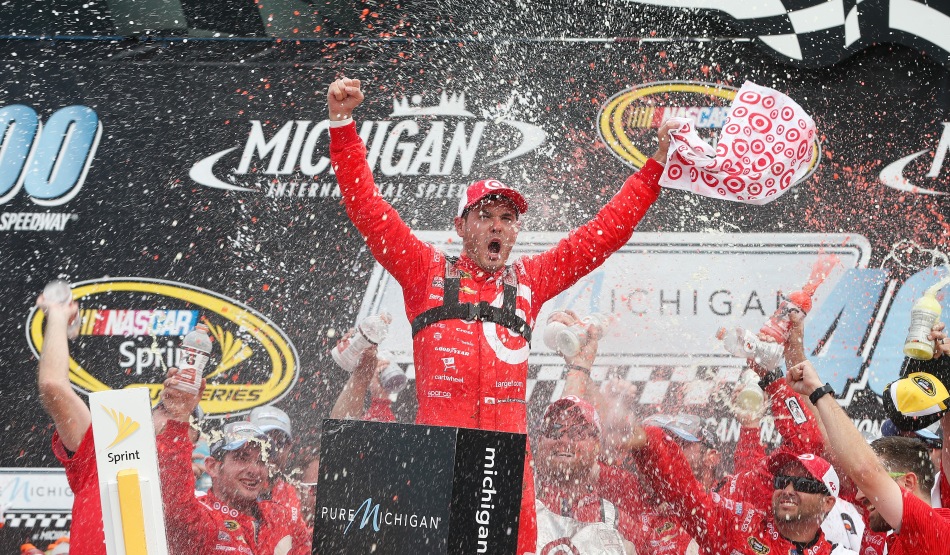 By Ren Hsieh and Saqib Rahim

On Sunday, Kyle Miyata Larson won his first Sprint Cup Series victory by taking the checkered flag at the Pure Michigan 400 at Michigan International Speedway. Driving the no. 42 Chevrolet for Chip Ganassi Racing, the 24-year-old Elk Grove, California native, led for a race-high 41 laps in his 99th career start.

Larson, whose mother is Japanese-American, became the first driver of Asian-American heritage to win at NASCAR’s highest level. He was also the first to win as a graduate of NASCAR’s Drive for Diversity (D4D) initiative, a development program for female and multicultural drivers and crew members with the potential to establish a career in NASCAR.

The program, which began in 2004, was created to introduce more diversity to a traditionally white male-dominated sport with the hopes of also attracting a more diverse audience.

It’s a noble cause, and the existence of the D4D suggests that NASCAR is aware of where the sport stands on the diversity scale, and is keen on expanding its reach. To this, Larson’s win is important.

For one, his Japanese-American heritage is not something Larson shies away from. On a phone call this Wednesday, Larson applauded NASCAR’s diversity outreach and said he was proud of his heritage and what it means for the sport.

His middle name, Miyata, is a nod to his Japanese roots, his mother’s maiden name. His one-year-old son with girlfriend, Katelyn Sweet, sister of NASCAR driver Brad Sweet, is named Owen Miyata Larson to carry on the tradition.

NASCAR, for its part, also included a Japanese translation for the press release announcing Larson’s win. Kyle Miyata Larson is now the poster boy for the D4D program.

But Drive for Diversity is not without its limitations. The program has drawn past criticism for producing new drivers only to see them fall out of racing for lack of sponsorship.

Notable grad, Darrell “Bubba” Wallace, Jr., also a touted D4D success, has had his share of struggles in garnering adequate sponsorship as well in the NASCAR XFINITY Series. It seems to be an issue all drivers looking to make the jump to NASCAR are struggling with, not something endemic to non-white drivers, though Wallace admits he isn’t sure either way.

This is where Larson’s participation in the program is different from most grads. He came to the program after he had already been courted by Chip Ganassi Racing. It was Ganassi who suggested Larson take a look at the D4D program for more experience.

“Free experience, if you want to call it that,” said Larson. “It probably saved [Ganassi] close to $1 million, because I got to go race their cars for free.”

It’s in the in D4D program where Larson got his first real experience in stock cars–some of the most formidable race cars in the world, which don’t come cheap.

Chip Ganassi Racing signed Larson in 2012. He won his first official stock car race in February that year, the Pete Orr Memorial 100. The accolades have piled on since then, including Sunoco Rookie of the Year honors in 2014. Larson has shown every indication that he will be a big player in the Sprint Cup Series for years to come.

Larson has a pragmatic take on D4D, suggesting that irrespective of the program’s mission, it is essentially an opportunity for drivers to get noticed. It is no guarantee.

“They have to take full advantage of it and do a great job if they want to get noticed and get hired on by other teams,” said Larson.

That opportunity to get noticed is the distinction NASCAR is likely to focus on. Larson’s win as an Asian American grad of D4D came in vastly different conditions than those NASCAR Hall-of-Famer Wendell Scott had to endure. Scott battled segregation to become the first African American to win a Grand National Series race in 1963, NASCAR’s highest level at the time.

The win on Sunday qualifies Larson for the Chase for the Sprint Cup (NASCAR’s version of the playoffs), just another notch in what appears certain to be a long line of firsts.

As to whether Drive for Diversity has helped NASCAR pull more diverse fans, Larson added, “I feel like we’ve already seen a small change.”

“I’m really new in NASCAR, but I feel like since I’ve been here, I’ve noticed more Asians at the race track, wearing my apparel and my t-shirts and stuff like that.”