As we literally sit here and count the hours until next year, we decided to scour our Twitter feed to see what really spoke to us this year in sports. Below, in no particular order, these were our favorite Asian/American moments and/or stories of 2016.

Yao Ming’s Speech at his Hall of Fame Induction

Was it a Hall of Fame speech or a roast? Yao had jokes for his fellow inductees, Shaq and AI, dropping zingers like he was a 7-6 Dean Martin. But he also gave classy shout outs to his friends and coaches, which included some of China’s great basketball pioneers.

It’s certainly possible that we missed one, but we’re pretty sure this is the full assortment below with Lin’s original Knicks cut plugged in for reference.

When we heard Sacramento-based reporter, Ryan Yamamoto, had shot a documentary on Tommy Kono, we started doing some research. Honestly, we’re a little ashamed we didn’t know Kono, a Japanese American born in California, raised partially in the Tule Lake interment camp, who became the greatest weightlifter in the world. None other than Arnold Schwarzenegger himself credited Kono with inspiring him to become a bodybuilder.

The real story of course is Colin Kaepernick’s civil protest by kneeling during the national anthem before his team played football. It should have been the biggest sports story of the year, and it probably still is, but the electoral selection of Donald Trump as President-Elect just makes it seem almost fruitless. We hope that’s not the case.

In the issues of civil protest and simply the humane treatment of our African American brothers and sisters, Asian Americans can sometimes find themselves stuck on the outside looking in. So it was inspiring to see fellow athletes like Doug Baldwin and Jeremy Lin, and many other like-minded Asian American sports journalists speak their respective minds on these issues that don’t seem to be going away anytime soon.

If you are offended by a peaceful protest regarding Justice and the treatment of others, isn’t that the point? 🤔

Foreal though wth?!? The #AltonSterling video makes me sick…its gettin out of control!! #blacklivesmatter #thisworldneedsprayer

The Faces of Fu Yuanhui / The Dances of David Katoatau

While we gave the world Ryan Lochte this summer in Rio, China and Kiribati gave us Fu Yuanhui and David Katoatau, respectively. We accept the L in this cultural exchange.

If not for her candor, then it was her hilariously over-the-top, yet somehow perfectly reasonable, facial expressions that made China’s Fu Yuanhui aka “the Human Emoji” a fan favorite.

Katoatau, meanwhile, danced after his every lift in the Olympics to raise awareness for his tiny island home of Kiribati. He was successful in that effort.

Addison Russell Has This Thing About Underwear

The young Chicago Cubs shortstop broke out in the NLCS, and then cranked a historic grand slam in Game 6 of the World Series, helping the Chicago Cubs win their first title in several eons. Maybe the Cubs winning was the first sign of this pending apocalypse that is just slow-playing us like a real d*ck right now, but it was kinda cool to see the 22-year-old Pinoy boy reach stardom in the meantime.

The Artistry of Korean Bat Flipping

DW mentor (and one of our all-time favorite humans), Mina Kimes, went to Korea to study the KBL’s world renown bat flip. Paired with beautiful illustrations from Mickey Duzyj, it’s the best story on Korean bat flipping we’ve ever seen.

Ashima Shiraishi Is the New Face of Rock-Climbing 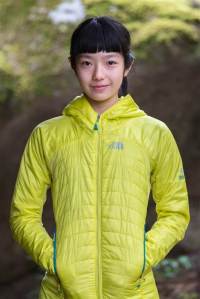 She’s just 15-years-old and already one of the greatest rock climbers of all-time, putting new entries into the record books on the regular. We have a feeling those soon-to-be trademark bangs are going to become pretty familiar.

Sponsored by The North Face, landing endorsements like this Android Wear spot, she has become the fresh young face of rock-climbing. Already popping up all over YouTube, she’s appeared this year in countless newspapers and magazines, including Time ’s list of America’s most influential teenagers, an appearance on the The Late Late Show With James Corden. She’s even done a TED talk.

0 comments on “Our Favorite Asian / American Sports Moments of 2016”