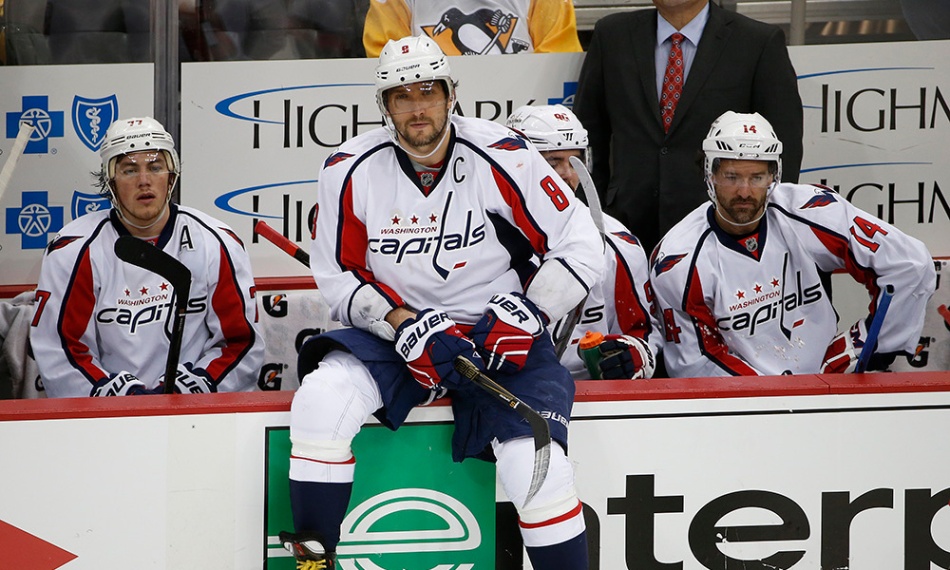 Every so often, the custodians of the cosmos will discover that a problem has spun out of their control. They discover a great imbalance in human affairs, one that they had power to resolve long ago, but which now can only be ended through blood and rancor.

This year, they have picked the second-round series between the Washington Capitals and the Pittsburgh Penguins, which the Pens currently lead 2-1.

Allow me to understate matters: This series will answer most of your outstanding questions about life. After a decade of serial playoff failures, the Capitals and Alex Ovechkin have launched one last, feverish campaign to try to win it all. The Pens, of course, are the Pens: winners of last year’s Cup, eliminators of last year’s Capitals, and followers of the wholesome, gentle, flawless, and boring Sidney Crosby.

Up until game 3, Crosby was in top form and looked ready to lead the Pens to yet another boring championship. Unfortunately, he suffered a concussion on this play in the first period of game 3:

Crosby’s out indefinitely, which makes this a closer matchup than it was before. But more than that, we now have a proper blood feud. Pittsburgh wants revenge for their fallen hero. Washington, fueled by resentment and envy, wants to destroy their rival and prove they have the mettle to be champs.

Men will suffer. Blood will soak the soil. A final judgment will be handed down from the heavens. Let us run down what is at stake.

Q. Do a few people get to have everything, or is there enough to go around?

A. The hockey gods are strikingly unoriginal. Just four NHL teams have lifted the Stanley Cup over the last eight years: the Pittsburgh Penguins (2), the Chicago Blackhawks (3), the Los Angeles Kings (2), and the Boston Bruins (1).

L.A. missed the playoffs this year. Boston and Chicago got bounced in the first round.

That leaves the Pens. Did you know that Sidney Crosby is the best player in hockey and one of the best to ever lace ’em up? And that he’s the avatar of Canadian hockey supremacy? And that NBC has a full-time mop-up crew for the way its analysts slobber over him? And that he has as much personality as a jar of peanut better? Barf, barf, barf.

Let’s be real. The Blackhawks were good, and the Caps had the best regular-season record, but the Pens are and always have been the favorites. Why? Because one of the best predictors for who wins the Cup is who has already won the Cup.

That means the sabretooth tiger around these parts (sorry Nashville) is Pittsburgh. They have scoring, speed, and depth. They can control the play with high-tempo attack hockey; they can play rope-a-dope and stab you with a goal on the counterattack. Because they can win any kind of game — have proven it — they have belief.

The Capitals, meanwhile, have iced some of the most talented rosters to never make it past the second round of the playoffs. Actually, their repeated failures have made some of them remarkably wise about the perfection that playoff hockey requires, and how it feels to always fall short of that, like a son disappointing his father. Here’s one of my favorite reflections from defenseman Karl Alzner, from 2015:

There’s nobody in this entire league — well, there may be a couple guys — but there’s not many guys that can go out there and change the exact look of an NHL hockey game. It’s just too hard, the players are too good, and so you have to use everybody out there. Everybody has to be on, and working the exact same way, pulling the same rope, and you can’t stray from that. We’ve proven that the last few years.

For most of a decade, the hockey gods have not seen fit to share the Cup with the rabble. Will this year be different? Haha, you tell good jokes.

Q. “Is a dream a lie if it don’t come true, or is it something worse?” -Bruce Springsteen

A. Alex Ovechkin, drafted in 2004 and one of the most thrilling wingers of all time, has proven himself in all ways but one. He’s hit 50 goals seven times. He throws hits. He defends, kinda. He throws off defenses with his speed and frightening shot.

Not only is he one of the greatest players ever, he’s got a huge gap-toothed smile and a wry, Russian-accented personality. Behold this 2013 gem: “My hair was too big. And my head is big, and my hair is big, so my helmet gets too small. So I have to make a haircut.” Alex makes hockey fun.

But as we all know, if you never win the championship, you’re forever a second-rate great. As podcaster Paul Gackle put it, if Ovechkin loses this series,

He’s gonna be Dan Marino, not quite Joe Montana. A nice NFL quarterback, everybody will talk, what a release. Boy, did Dan Marino, he really opened things up…he’s not Joe Montana in the record books. Charles Barkley, great player, not Michael Jordan.

This year is different, of course, just like every other year has been. Everyone’s been saying it since the start of the season: These Caps look scary. They’ve got skill, size, and the ability to play a bruising, physical game. They allowed the fewest goals in the league this season, and they were third in scoring. GMs would kill for a sniper like Ovechkin; a playmaker like Nick Backstrom; a clutch scorer like Justin Williams; a goalie like Braden Holtby, who’s so intense he warms up by tracking droplets of water in mid-air.

That’s the problem with the Caps. There’s always so much buildup that you don’t know if you’re seeing a juggernaut about to win the prize, or a club-carrying colossus about to trip on its shoelace.

So now it falls to the powers that be. They’ve given two Cups to Crosby, Ovechkin’s foil. Will they fulfill NBC’s wet dreams and give him a third? Or will they allow Alex the Great to end hockey fans’ jeers forever?

Q. Why do you deserve bae after all you’ve done and said?

A. You know when you make what seems to be the smart decision, then it immediately turns around to bite you in the ass, and now you’re at the mercy of the very person you mistreated, and they’re not saying a word about it, just cheesin’ all day?

The Penguins drafted Marc-Andre Fleury #1 in the exquisite 2003 draft, hoping to find a franchise goalie. And in 2009, “the Flower” helped power the Penguins to their first championship in the post-Mario-Lemieux era.

But Fleury never quite reached the elite goalie ranks of guys like Carey Price (Montreal) or Henrik Lundqvist (New York Rangers). Something was always missing. That thing, it turns out, was job security.

Last season, as Fleury battled a concussion problem, a kid named Matt Murray straight took his job. Murray had only 13 games of NHL experience but starred for the Penguins in the playoffs, playing 21 games and posting a ridiculous 0.930 save percentage and 2.08 goals-against average.

The Pens won the Cup. Fleury and Murray were supposed to split the net this season. But come February, Pittsburgh GM Jim Rutherford had Fleury on the trading block. “He can help Pittsburgh or any team he may play on,” Rutherford said.

But Fleury didn’t move, and then in April, right before Game 1 of the playoffs…zoink! Murray hurt himself in warmups, bringing the scorned Fleury back to the Penguin net.

If the Penguins win this series with Fleury in net, we will have conclusive proof, akin to E=mc^2 or the Hubble Constant, that a Cup-contending team can absolve all previous acts of disrespect to bae. You know you were my true boo all along, right?

Q. Are you the primary impediment to your own success?

A. With their backs to the wall in Game 3, the Caps did their fans proud. They went to Pittsburgh and showed the fast, aggressive, physical team they can be when they’re confident. With 2 minutes to go in the 3rd period, they were up 2-0 on their rivals and the stands were clearing out.

Then, with two minutes left in the game, Pittsburgh scored two goals to tie it.

Pittsburgh erupted. Fans who’d just left dropped their hot dogs. This was it. Fate had smiled upon the Penguins yet again.

Playoff hockey is mental as much as physical. The Caps have all the talent to hang with the Pens and beat them. But as everybody knows, the Caps are also fragile, and this can be exploited. In the first round, they were such heavy favorites against the Toronto Maple Leafs that they had to slug their way to a six-game series win.

I’m a Sharks fan. I know how a team looks when it expects something to go wrong, thereby setting the conditions for that very outcome. There is no reason for an elite team to give up two goals in two minutes, let alone to the rival that’s trying to go up 3-0 in the series and destroy your franchise.

Lucky for the Caps, they pulled it together and scored in OT to beat the Penguins on Monday. Now Sidney Crosby’s injured and the Caps have to win one more in Pittsburgh to make it a series.

Oh, they’re not up against much. Just that they’ve only beaten the Penguins once in the playoffs, out of nine tries. Just that Ovechkin’s star will be permanently dimmed if he never wins a Cup. Just that they’ve been at this for a decade and never made the Finals. And that they have a dozen free agents this summer and that this team is about to change.

The hockey gods have finally been forced to make a decision. It will be bloody and consequential. I’d watch.

0 comments on “NHL playoffs: Caps-Pens will answer most of your questions about existence”