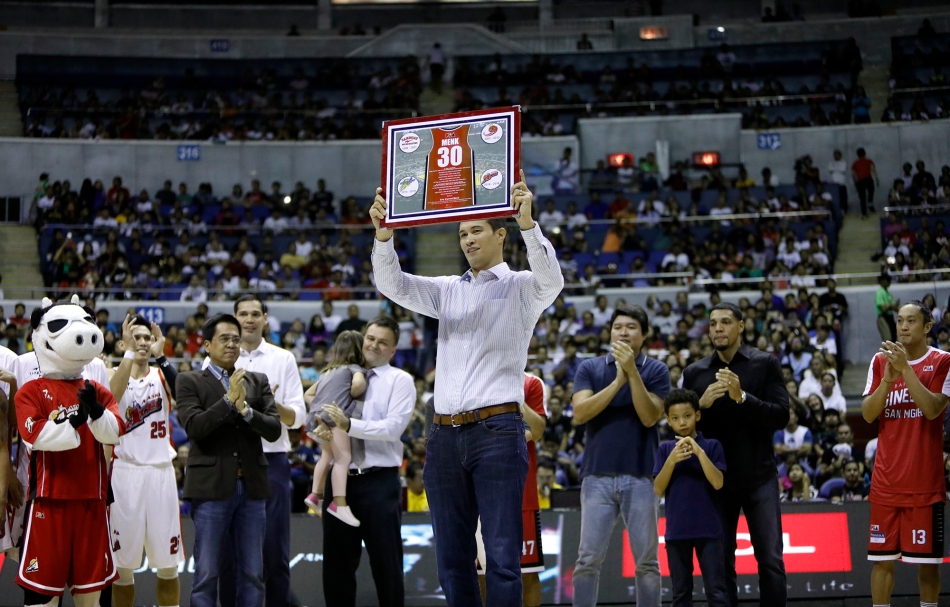 On May 7th, Eric Menk stood for one final ovation on the Smart Araneta Coliseum floor. The Alaska Aces had honored him with a special tribute at halftime of their game versus Barangay Ginebra San Miguel as Menk officially said goodbye to an illustrious eighteen-year career in the Philippines Basketball Association (PBA).

Menk always wanted to play basketball professionally, but he never expected that the game would take him from rural Michigan to stardom and celebrity in the Philippines. During his time, he won four PBA championships and one MVP award, but his journey didn’t start in the Philippines.

“I was kind of the different guy (in Charlotte) always trying to fit in,” Menk told the Lansing State Journal. “There was always a part of me that I didn’t know much about.”

Menk attended Lake Superior State University, the only school that offered him a scholarship, and had a successful career playing Division II basketball as a 6-6, 220 lb power forward. He finished his career at LSSU with 1,800 career points in 105 games. He was the Great Lakes Intercollegiate Athletic Conference (GLIAC) Player of the Year in his senior season, leading Lake State to their only GLIAC championship.

After graduation, he played a year professionally overseas in Europe before finding about about the league in the Philippines. It was a no-brainer.

“I had relatives [in the Philippines], and that was something I was really seeking out to learn more about,” Menk told me via email from his home in Manila City. “So this was really a great opportunity to connect with a side of me I knew nothing about, meet some relatives, all while playing professional basketball.”

Back in the U.S., Menk had always tried to pretend he wasn’t different. He tried to avoid bringing up his Asian heritage with friends. If he could just avoid talking about it, maybe he forget it. Once Menk was in the Philippines, however, that all changed.

“It was nice to finally feel comfortable with who I was.” said Menk.

Menk is still considered a “Fil-Am” in the Philippines, but he has found Filipinos to be accommodating and welcoming far beyond what he expected.

When Menk arrived in the Philippines, the PBA was on the verge of internationalization. He was part of a small wave of Filipino Americans who found success in the PBA, along with stars like Danny Seigle and Paul Asi Tauluva.

“When I first got here, I was amazed by how professional the league was,” Menk said.

Nicknamed “Major Pain,” Menk became known for his chiseled frame and low-post dominance. During the height of his career in the mid-2000s, Menk was a double-double machine for Ginebra, winning the league’s Most Valuable Player award once in 2004-05. He led the Gin Kings to four PBA championships, earning Finals MVP honors three times. Menk is considered one of the PBA’s Forty Greatest Players of all time.

Menk was a tremendous worker. His high school coach told LSJ of, “a penchant for self-improvement,” a quality he didn’t find in many kids. And Menk’s first PBA coach, Al Chua, holds that Menk was a consummate professional.

In the newest phase of his life, Eric Menk is managing a podcast and a YouTube vlog about basketball and his personal life. He regularly has players and coaches on the podcast, giving a behind-the-scenes perspective of the Filipino basketball scene.

“People I have on [the podcast] feel pretty comfortable around me since I just stopped playing,” says Menk. “I thought it would be fun to sit down with my guests, give people the chance to know them a little better, and just have an easygoing conversation.”

His YouTube channels not only feature video clips of his podcast, but also capture scenes from his personal life. Menk started his vlog to record his retirement process.

“I want to document my life from my last few games,” said Menk, “to the transition from being a professional basketball player to whatever I’m going to end up doing.”

Menk is now also a basketball analyst for CNN Philippines.

When Menk first came to the Philippines, he had no idea how long he would be playing or whether it would bring any kind of tangible success. His first year or so was tough, he had no friends, but slowly, he was able to build a support system through basketball with coaches and teammates. Menk is still amazed by how long his stay in the Philippines has been.

When Menk decided to play basketball in the Philippines, he may have done so with little consideration beyond an opportunity to really connect with his pinoy heritage. If there were times when Menk felt isolated for his ethnicity in his Michigan hometown, that would not be the case in Manila. At peace now in the Philippines, Menk has found a home, built a family, and discovered a community and culture he once didn’t know he had. He just happened to become a pro basketball legend along the way.

0 comments on “Home Is Where the Hoop Is”