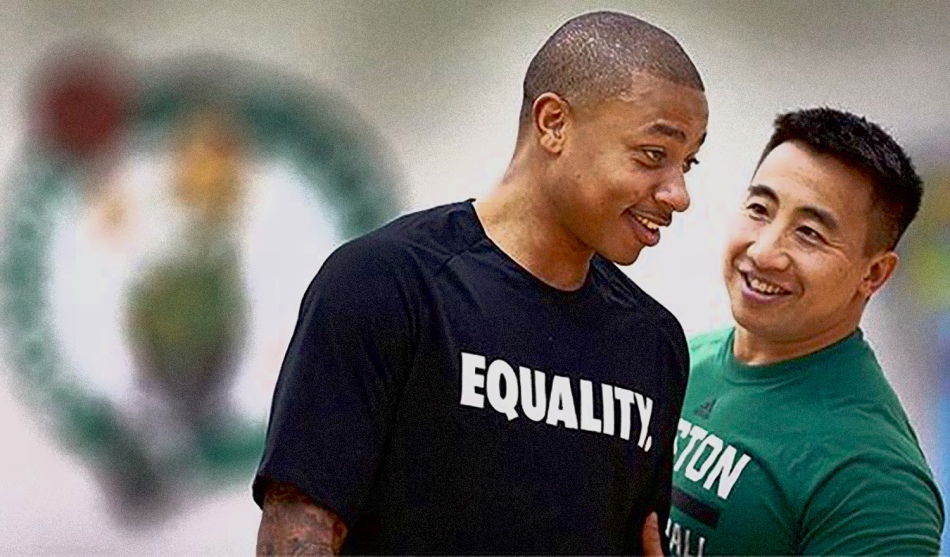 If you watch enough Boston Celtics games, you might have noticed head strength and conditioning coach, Bryan Doo, who stands a couple heads shorter than most of the players on the court, but muscular with a big, mirthful smile, known affectionately as “B-Doo” by friends and colleagues. Whether he’s warming up Avery Bradley with a resistance band or breaking out an elaborate pregame handshake routine with Kelly Olynyk, B-Doo is low-key the Celtics’ most watchable non-player on the sidelines. 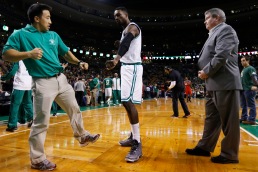 Doo is now perhaps most well known for his contribution to the league-wide obsession with pre-game peanut butter and jelly sandwiches, something he helped start at former Celtic Kevin Garnett’s request. Watch KG make a PB&J on his own (spending 2 minutes spreading peanut butter on a single slice of bread), and you’ll see that without Doo’s culinary touch, the PB&J revolution would have been a nonstarter.

Before tip-off of every game after Garnett’s decree, Doo would make as many as twenty customized PB&Js before, as described in Baxter Holmes’ great feature for ESPN The Magazine. As Celtics players moved on to different teams, the obsession followed them.

Peanut butter and jelly aside, B-Doo is also one of the NBA’s most beloved and respected strength and conditioning coaches. His unique warm-ups before practice are a team favorite. Doo often has the Celtics playing capture the flag, ultimate frisbee, or dodgeball to get players ready and fired up after weeks of repetitive practices.

B-Doo was hired by the Boston Celtics in 2003, the same year as president of basketball operations, Danny Ainge, and like Ainge, his reputation behind the scenes grew quickly. In 2010, he helped nurse Kendrick Perkins back from an ACL injury suffered in Game 6 of the 2010 NBA Finals. Former Celtic Tony Allen credits Doo for his expedited return from an ankle injury in the 2009-10 NBA season. Jared Sullinger attributed the Celtics’ health in the 2013-14 season to the Celtics strength and conditioning team.

The list goes on. As head strength and conditioning coach, Doo is responsible for rehabilitation and training of all Celtics who come through the TD Garden doors, as well as the development of their young prospects. He worked extensively with Phil Pressey, Kelly Olynyk, Chris Johnson, and Chris Babb over the summer of 2014, with Olynyk making the biggest jump this season after a now legendary performance in Game 7 of the Eastern Conference Semifinals.

Doo seems to inhabit various roles as trainer, coach, and friend that effortlessly bleed into each other, demonstrated by his playful camaraderie and consoling presence in the locker room. His connection with Olynyk and star guard Isaiah Thomas is typical of the kind of bond he forms with Celtics players.

Being around this guy makes me want to be better and give back even more. Retweet with the hashtags #IsaiahThomas #NBACommunityAssist pic.twitter.com/Cm6ZUAVEEX

None more so than Kevin Garnett, for whom Doo helped to recover from an abdominal strain that sidelined him for several games in 2008. In appreciation, Garnett bought him a tailored suit for the Celtics visit to the White House after winning the NBA title that year. Garnett then invited Doo to travel to China with him for a photo shoot after signing a shoe deal with Chinese shoe company, Anta.

After fourteen years with the Celtics, Doo is not oblivious to his role amidst the rich history of an iconic sports franchise. He spoke about his appreciation and awe back in 2013:

I grew up watching Larry Bird, Kevin McHale, Dennis Johnson and my boss Danny Ainge. It’s been fun meeting all the players that I grew up watching around the league. It’s still weird to me to get a phone call from Danny Ainge or talk to Dominique Wilkins. Since the Celtics have such rich history and tradition, there are so many retired players around all year: Bill Russell, John Havlicek, Bob Cousy, Sam Jones and others.

In a post-season accused of lacking competitiveness because of injuries to star players–including the Celtics own Isaiah Thomas–it’s no secret now that keeping players healthy wins championships. So, Doo has the unique position of contributing to how Celtics history continues to unfold in an integral role that is generally overlooked. While there is certainly some luck involved, Doo and his team were essential to keeping Garnett, Paul Pierce, Ray Allen and Rajon Rondo on the floor during their 2008 title run.

B-Doo still might not get recognized by casual fans in the halls of TD Garden. But some day when Garnett, Pierce, Rondo (and maybe Ray Allen) return to the arena, mentioned in the same two or three breaths as the Boston greats, Doo can say that was part of his chapter in Celtics lore. With a number 1 draft pick, another lottery pick next season, and plenty of cap space for a Celtics team that finished with the best record in the East, the best part may be yet to come.

2 comments on “Everybody Loves B-Doo”